This popular festival is back in August (after successful sell out years in 2010 and 2011) with documentaries and talks from cycling’s leading filmmakers and authors. Whether you’re a seasoned two-wheeler, a fan of the sport, a recreational cyclist or discovering the bike for the very first time, come be inspired by the story of the bicycle at Watershed.

In the words of John F Kennedy, nothing compares to the simple pleasure of a bike ride. Cyclescreen 2015 relives some of the great dramas that the bike has provided us with through its intriguing history and takes us closer to the story than ever before. Plus we’ll be unearthing how the bike has been used as a tool for adventure and creativity in the lives of normal everyday people.

Bristol and the South West both played an important role in cycling’s success story with the founding of the Sustrans National Cycle Network, now celebrating its 20th Anniversary. We’ll be toasting their success in the festival’s opening event – a film simply called Bicycle: A Great British Movement followed by a Q&A with John Grimshaw, creator of the National Cycle Network and David Sproxton, cycling advocate and chair of Aardman – all of whom were involved in setting up the network back in the day. They will be joined by Mayor George Ferguson on Thu 20 Aug.

Other highlights include a talk on cycling’s prestigious World Hour Record (so recently toppled by Sir Bradley) from ex-rider and time trial specialist Michael Hutchinson. Cycling author and journalist Herbie Sykes (winner of the British Sports Book Awards) talks to Jack Thurston, presenter of The Bike Show Podcast, on Sun 23 Aug. Local artist Nick Hand, cyclist and founder of Bristol’s The Letterpress Collective will be here too to talk about his Printing Bike Project.

Tommy Curtis and Benjie Croce, Festival organisers said: “In celebration of Bristol’s long-standing affection for the bicycle, we’re delighted to return to Watershed with Cyclescreen for 2015. Cycling culture is rich and fascinatingly diverse. We can only scratch the surface of it here, but we hope that the stories that we share at Cyclescreen provide an opportunity for people to discover the many environmental, health and social benefits engaging with cycling provides.”

Cyclescreen also takes a look at two of the most inspiring women to ever make use of a bicycle – Dervla Murphy is one the world’s foremost travel writers – and the magnificent Eileen Sheridan (now aged 90), who became a time trial sensation in the 1950s (Thu 20 Aug).

Join us this August to celebrate the ways the wonderfully adaptable bicycle contributes to people’s lives and continues to win the hearts of the Great British public.

Cyclescreen 2015 is supported by Bristol Green Capital 2015 and Better by Bike. 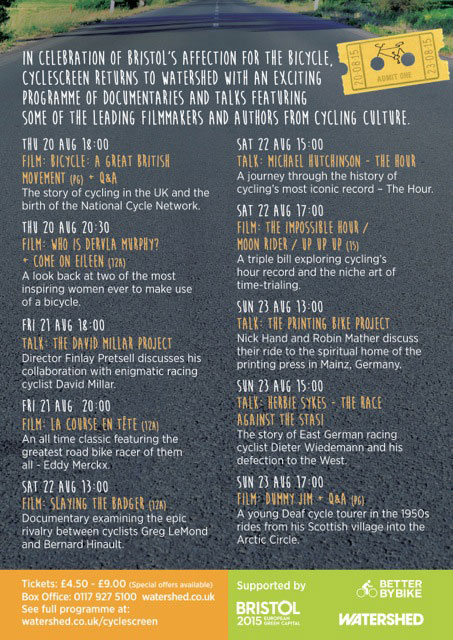 This entry was posted in Events - Training. Bookmark the permalink.