Journey to the ‘World’s’ 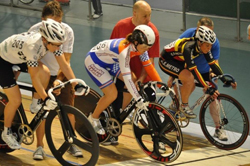 If somebody had said to me in March that I was going to be at the British Cycling ‘Masters National Track Championships in June, standing on the podium receiving a medal, I would have thought they were mad!

I’d attended the VC turbo evenings, coached by Chris Davis at the beginning of the year and he invited me to the Newport Velodrome in March for a ‘taster session’. From that moment on I was hooked. After some intense training sessions where Chris made me hold the wheel of Janet Birkmyre, Masters World, European and UK Champion, I wanted to throw in the towel. Not believing it was possible to get anywhere near her.

Every Tuesday he pushed me and I battled on. I resisted, trying out sprinting which I thought I would be good at and continued with pursuiting which Chris said I would be best at. Turns out he was right and I was wrong – guess that’s why he’s the coach!

We discussed (Chris told me I was entering but made it seem like my idea) entering the British Cycling Masters National Track Competition in June which only gave me 3 months of track training until the competition. Going out with the Velo Club on a Sunday morning for an endurance ride helped me develop my bike handling skills – sorely needed. I did sneak away for a cycle camp in May for a week of intense hill training to build stamina and kill any negativity of being unable to achieve perceived impossibilities (like great big mountains that go on forever knowing you can’t stop until you reach the top). Although cake and coffee at the end, made the pain and suffering all worthwhile.

On the weekend of the Championships I’d entered not two, but three disciplines. The Sprint (Janet said it would be fun so I thought, why not), 500m Time Trial and Pursuit.  Also, there weren’t enough female entrants in the age category above me so they were putting two extra people into ours. Not bad I thought, until I found out one was Janet!

Had they not combined the age groups I would have had a silver medal in all three. However, I came fourth in the Sprint and Time Trial so come Sunday I was totally exhausted, didn’t think I was going to win anything, Chris told me to relax a bit and treat it as another days endurance training.

Once I was sitting on my bike, poised at the gas gate waiting for that final count down, I felt sick and full of adrenaline. The countdown hit zero and I was out sprinting as hard as I could trying to remember everything I’d been taught. I had Chris shouting out my lap times at the side of the track and I thought I’d miss heard at one stage so pressed even harder on those pedals. I’d never been able to complete 8 laps in training until the week before the race, and it was behind a Derny. I came in at 2.39.68. I didn’t know if this was any good but once I saw the commissaire approach me with the clipboard and she said I’d got silver I hugged her, Janet and everyone else that was near me.

Standing on the podium in my VC kit was one of the happiest and proudest moments of my life. Now the real hard work begins for the World’s in October!

First up was the qualifying round:

Previous South West winner Gavin set an early pace with a fast time of 21.59 placing 2nd. Jon posted a time of 22.43 and was placed 10th with Rob posting a 22.89 and placing 16th. As only the top 16 riders go forward from qualifying this unfortunately meant Charley, Simon and Noel didn’t go through.

First round
This round saw Rob beaten by the fastest qualifier Dan Bowen. Both Jon and Gavin won their respective races and went through to the Quarter finals.

Gavin proceeded to win his semi-final race against Dream CC’s James Van Gowler which meant he was in the Final.

The final saw Gavin pitted against a very fast Dan Bowen who has previously placed 2nd in the National Finals in London. As is always customary with Rollapaluza the final distance was changed to 1000m (much to Gavin’s dismay). Gavin fought hard but lost to Dan with a time of 44secs placing 2nd.

Well done to all VC Bristol riders that took part and big thanks to Simon for sponsoring the event.

A full write up and results are available on the Rollapaluza website: http://www.rollapaluza.com/rollapaluza-cyclescreen-bristol-sponsored-by-webbs-of-warmly-in-the-watershed-arts-centre/

Comments Off on Rollapaluza Cycle Screen Bristol
May 3, 2011

After winning the south west event Gavin Thomas went up the the Rollapaluza final in London where he competed with qualifiers from all over the UK to race against the fastest roller racers in the country! Not only that but he produced a fantastic 4th overall and missed the podium by 200th’s of a second!!